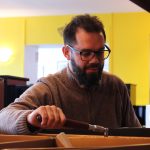 Our technician, Emmanuel (Manu), started his training in September 2001 working as an apprentice for a piano shop and workshop in the centre of Paris. This four years experience included tuning, voicing, regulating and also repairing pianos of  many different brands. He then continued his journey spending two months training in the renowned Schimmel Piano factory in Braunschweig, Germany. Being able to see how pianos were made was a very valuable experience as a technician, helping him to expand his knowledge and skills. He then applied for a job at the Yamaha European Distribution Centre in Belgium, preparing brand new Yamaha and Kemble pianos for dispatch to France, Germany, Belgium and the Netherlands. After less than a year, Emmanuel was sent to Japan to the Yamaha Piano Technical Academy in Hamamatsu. The one month Grand Piano Course was a very challenging and rewarding experience but this was just the beginning of a fantastic journey as, a year later, Emmanuel was offered a position in the Yamaha Music UK branch, in Milton Keynes. This gave him the opportunity to broaden his field of work visiting customers, preparing pianos for events, concerts, competitions and recordings. During his eight years working at Yamaha Music UK, Emmanuel went twice to Japan and successfully completed the Grand Piano Master Course and Concert Piano Course. In 2014, he became an Instructor for the Yamaha European Piano Technical Academy, teaching tuning and regulation skills to Yamaha dealer’s technicians.